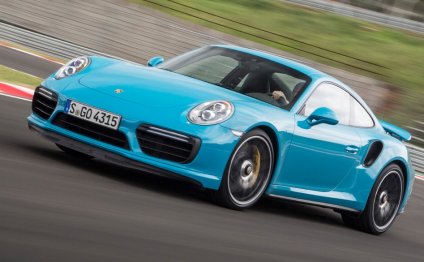 Not as thrilling as certain rivals

This is the facelifted Porsche 911 Turbo and Turbo S, built to bring the range-topping models in line with the rest of the 911 line up. The styling tweaks are subtle to say the least, but the revised models are distinguished by thin LED light strips in the front bumper, a new wheel design, the ‘three dimensional’ rear lights that are being rolled out across the Porsche range and a new engine cover with vertical slats.

The cabin is largely unchanged, although a new 360mm ‘GT’ steering wheel replaces the outgoing 380mm item and the latest, much-improved Porsche Communications Management system has been introduced. A rotary switch on the steering wheel allows the driver to toggle through the car’s various drive modes.

Power is up, fuel consumption is down and the performance figures are even more sensational than before. There are a handful of minor mechanical revisions beneath the skin, too.

The launch event, based out of the spectacular Kyalami race circuit in South Africa, only afforded us very limited time with the new 911 Turbo S. We’ll deliver a more detailed review once we’ve spent time with the car in the UK.

The familiar 3.8-litre twin-turbocharged boxer six remains, but modified inlet ports, new injection nozzles and higher fuel pressure – up from 140 bar to 200 bar – have helped to liberate an extra 20bhp. Boost pressure has also risen by 0.15 bar and for the first time the Turbo S uses bigger turbochargers than the lower-powered Turbo version.

Peak power is now 572bhp, which is delivered at 6750rpm. The peak torque output of 553lb ft is available between 2250 and 4000rpm. A seven-speed PDK twin-clutch gearbox is the only transmission option.

Naturally, power is channelled to all four wheels. The clutch plates in the four-wheel drive system now have a higher friction coefficient, which ensures even faster and more precise torque distribution to the front axle, while the rear axle still features a torque vectoring differential.

Porsche lists the Turbo S’s 0-62mph time as 2.9 seconds, but the engineers say this is ‘conservative’. Apparently, they regularly achieve 2.6 second sprints in ideal conditions. The top speed is 205mph, up from 197mph.

Porsche has introduced a ‘dynamic boost function’ to improve throttle response. The system keeps the throttle valve open for a short time after the driver lifts off the accelerator pedal and interrupts the fuel supply. This means boost pressure is maintained, so when the driver reapplies power – within a 1.5-2 second time window – there’s no delay as the turbochargers spool back up.

The rotary switch on the steering wheel allows the driver to select from the familiar Normal, Sport and Sport Plus modes, as well as a programmable Individual setting. The button in the middle of the switch activates the Sport Response mode, which primes the drivetrain for maximum response and performance for a 20 second period – to aid overtaking, for instance.

There’s now a middle setting for the Porsche Stability Management, which can be accessed separately from the Sport and Sport Plus modes. This intermediate setting allows a little more slip without removing the safety nets completely.

A front axle lift system, which increases ground clearance by 40mm, is now available, too.

The mechanical revisions are all fairly minimal, so the car’s dynamic behaviour is very much as it was before the facelift. While you’re not aware of the dynamic boost function operating on road or track, you do appreciate the near lag-free throttle response, even from low engine speeds.

The rotary dial, meanwhile, is intuitive to use and the Sport Response button really does make passing slower traffic on the road child’s play. You’d need gyroscopic inner ears to identify the extra straight-line performance over the previous model, but as ever the Turbo S thumps along on an enormous, effortless wave of torque.

The smaller steering wheel is an improvement over the old item, which always felt ever so slightly too big in diameter for such a dynamically capable car. The Turbo S remains the definitive all-weather, point-to-point supercar, but as with the previous version you really do need to push very hard on the road before the chassis begins to come alive. The steering, meanwhile, is still very direct and crisp, without ever dripping in feel.

In the dry there seems like endless reserves of grip for the rear axle, unless you’re really trying to break traction. While in the wet a degree of caution needs to be applied. Generous amounts of throttle will make the car rotate with ease. The slightly looser calibration of the traction control in Sport Plus mode allows enough angle for you to trim your line while also keeping a safety net should you be too eager with the throttle.